Spruce Root Weavers and Basketry Repair at the Museum

In the fall of 2018, the conservation lab at the Alaska State Museum offered a spruce root basketry repair class specifically for spruce root weavers. This was the same class I had given at the 2016 Museums Alaska conference, mainly to museum professionals. During that earlier class, two participants who were spruce root weavers suggested the class would be interesting to other weavers. Several conservators also took the class, and suggested it would be interesting to offer at a conservation conference. The November 2018 class for weavers was a five-hour course, with a free kit. It included hands-on learning of the Japanese tissue and wheat starch paste repair technique, examination of 40 damaged baskets in the ASM conservation study collection, a review of the pros and cons of the old repair techniques on baskets in the museum collection, and an informal discussion of cultural priorities in basketry repair. 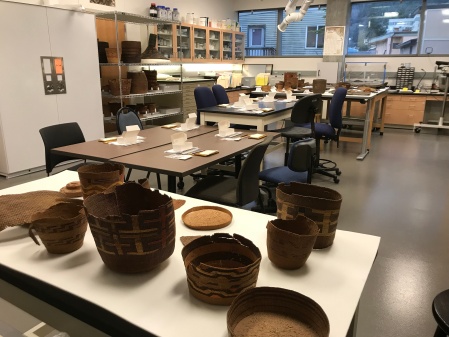 The class took place in the Alaska State Museum objects conservation lab with eight experienced weavers, both Native and non-Native.

The free kit supplied to each weaver.

Study baskets on the table in the foreground. Hans Chester and Yarrow Varrow look at old repairs on baskets from the museum collection on the multi-tiered cart. Kay Field Parker (standing in the purple) observes the work of Pamla Credo-Hayes. Seated L to R are Della Cheney, Marcia Stier, Liana Wallace, and Irene Lampe. 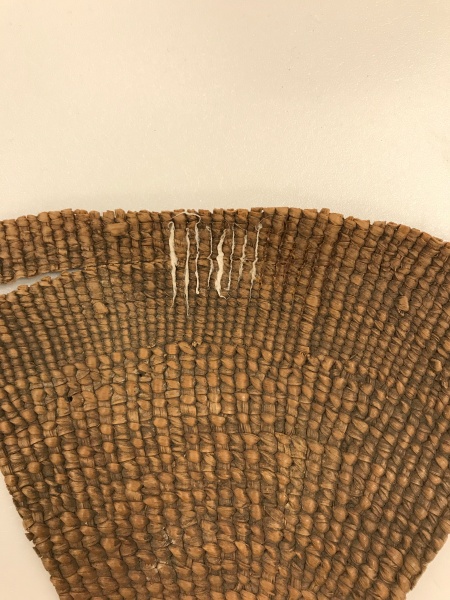 Example of a basketry tear, the splints unpainted, and the painted finished repairs in sequence

An example of the technique. You see the open tear to the left in the image, then 8 vertical white “splints” of twisted Japanese tissue held in place with starch paste to close the tear. Note that some are thicker, and some are thinner. Thinner ones grip better and are easier to hide. Next to the white splints are 6 more that have been toned with acrylic paint and nearly disappear.

Pamla at the basketry repair workshop

Pamla Credo-Hayes in the process of dragging a tiny twisted Japanese tissue splint through the paste just before she applies it to the tear.

Irene, Lay, and Liana at the basketry repair workshop. 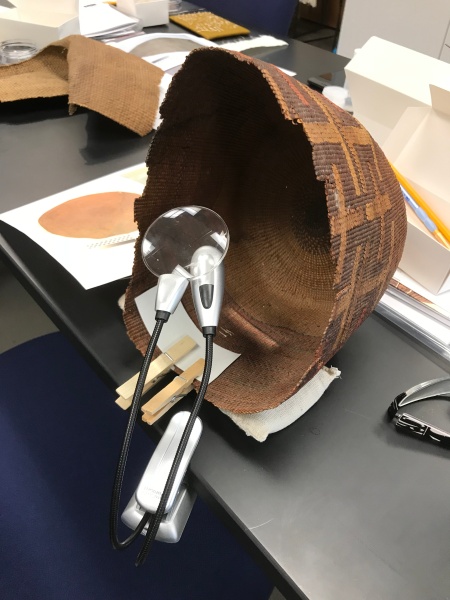 Liana Wallace brought in her own lighting and magnification equipment, which clips to the edge of the table. The basket is sitting on sandbags for support and has two pieces of thick curled blotter paper sandwiching the tear in the basket wall, held gently with clothespins to allow the tear to be held in alignment. 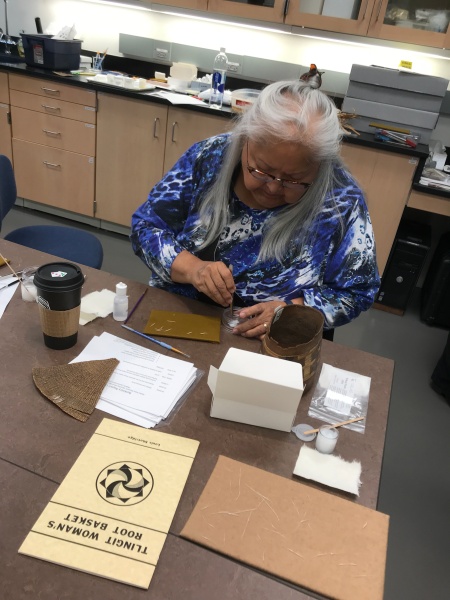 Della at the basketry repair workshop.

Della Cheney works a tissue splint in the paste. She brought in a classic reference book on spruce root baskets by Tlingit scholar Louis Shotridge. Della Cheney is a well-known Haida weaver in several media and has particular expertise in spruce root. Della’s sister-in-law, Edna Jackson, is known for her expertise in papermaking. Papermaking was discussed in regards to the Japanese tissue splints.

I bought Della Cheney’s book about cedar bark weaving, Weaving Our World, at a local bookstore, but last I looked it was available on both Xlibris and Amazon. Della spoke at the workshop about the challenges and successes she has experienced repairing cedar baskets, and the dilemma of how to reshape cedar bark hats that get wet if they are worn outdoors for ceremonies and cultural events. (after all, Southeast Alaska is a temperate rainforest). The cedar in this photo is courtesy of Liana Wallace, who donated it to the lab for exploration of indigenous repair innovations.

Hans and Yarrow innovating at the basketry repair workshop. 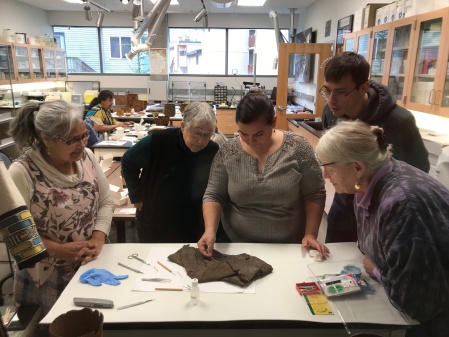 Yarrow Vaara (grey shirt) demonstrates her ideas about splinting robust basketry material with spruce root. Observing from L to R around the table are Liana Wallace, Marcia Stier, Hans Chester, and Kay Field Parker. In the background, Irene Lampe adjusts the basket she is repairing. 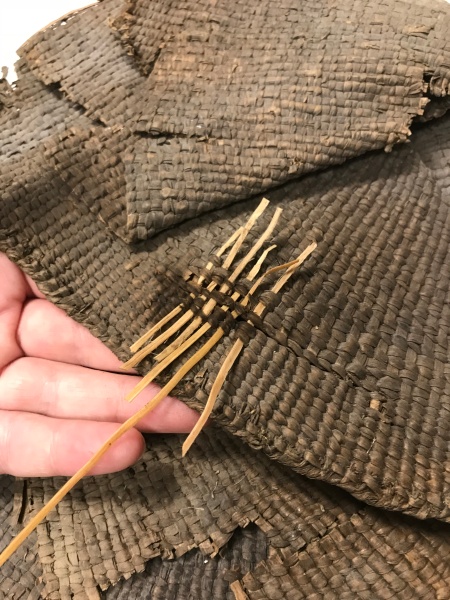 Yarrow’s splints on an old basket.

Detail view of damaged area of the study basket, showing an area dampened to increase flexibility, and thin splints of spruce root worked through the wefts to replace broken warps. 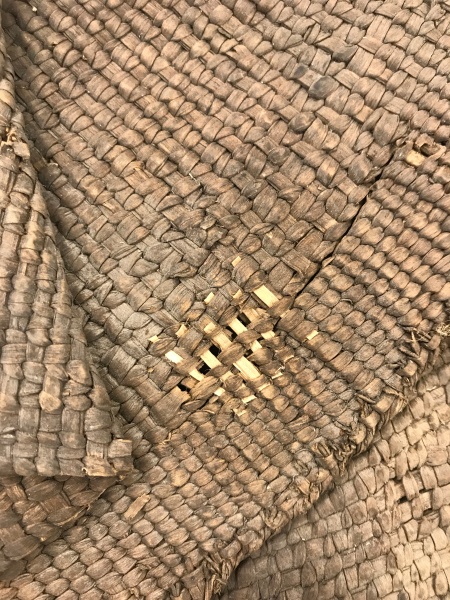 Yarrow’s splints on an old basket after trimming.

Detail view of the same area dried and trimmed. The splints could be toned to match with acrylic paint, and the splint could be inserted on the inside to hide the exposed ends. While the Japanese tissue and starch paste technique is an effective, gentle option for museum conservation and some baskets in the community, these repairs are quite delicate would readily fail on basketry objects (such as hats) still needed for active ceremonial or cultural use.

I’m offering another spruce root repair course for conservators at the American Institute for Conservation conference. The half-day workshop will take place May 13, 2019 at the AIC’s 47thAnnual Meeting in Uncasville, CT. The workshop will include the Japanese tissue and wheat starch paste technique, but also discussions about what I learned from the weavers. I am interested in what is happening to make space in museum practice for indigenous authority and what kinds of collaborations conservators can initiate. I am grateful for a stipend received from AIC and its Objects Specialty Group to travel to Connecticut for the AIC conference and I look forward to reporting back on this weblog what kind of feedback I get from conservators about the insights shared by the weavers. I am very much hoping to discuss issues of indigenous authority further with conservators during the conference, looking for examples of successful collaborative practice and making space for Native voices. The Alaska State Museum conservation lab has been active sporadically in this endeavor, but more recently we’ve been thinking about it more strategically.

The references I printed out for the weaver’s kits included the following:

This entry was posted on Thursday, February 7th, 2019 at 6:33 am and is filed under PROJECTS & IDEAS. You can follow any responses to this entry through the RSS 2.0 feed. You can leave a response, or trackback from your own site.